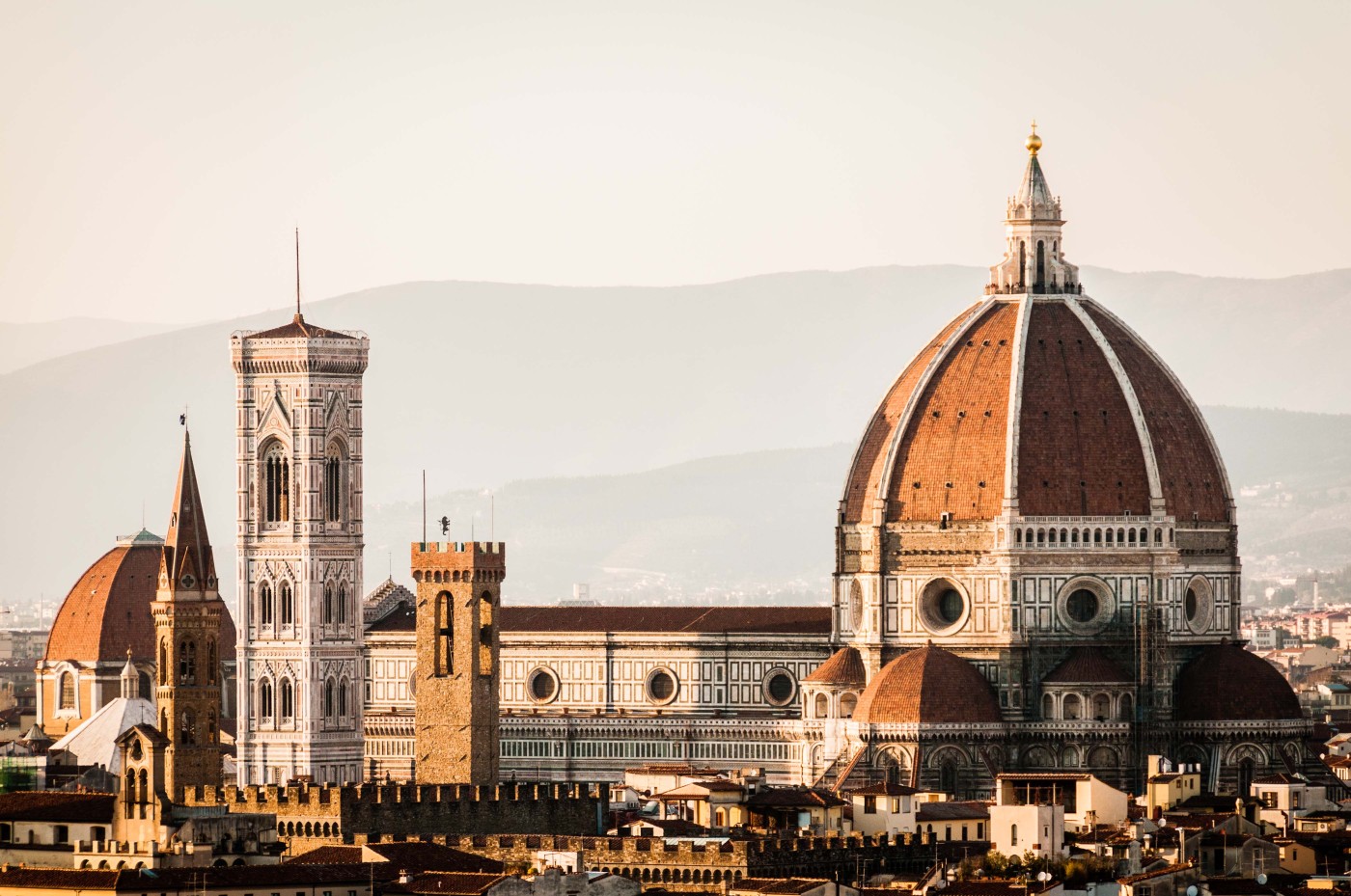 We step off the plane and straight onto a bus for the 60 second journey across the tarmac to the terminal. With no checked bags to wait on and a minimalist carry-on kit we are free to don our sunglasses and glide our way briskly towards the taxis. “That’s it? No passport controls?” “I guess not.” “But we got stamped in Paris just going between terminals. I want an Italy stamp!” Resigned, I put my passport away and briefly envision the joy I’ll feel at getting my Italy stamp upon leaving. Steph isn’t fussed either way.

We’ve come to Florence, Italy, for a 4 day, 3 night city break celebration of our 2nd wedding anniversary. I wish I could tell you that traveling to Florence is a dream come true for both of us, and that we’re both hardcore art junkies who can barely contain our excitement at getting to see heaps of masterpieces, but I can’t. Don’t get me wrong, we’re thrilled to be here and really interested in seeing all the sights, but honestly Italy was never on our short list of dream destinations. Dreams, however, sometimes must give way to reality, and the reality is that Florence offers the right price and the right flight itinerary from our home in Aberdeen, Scotland.

“Oh shit!” I never say it out loud (for a change), but instead stop in silence certain that we are about to witness a pedestrian massacre. The stereotype says that the standard of driving in Italy is haphazard at best, and god-awful dangerous at its worst. The taxi driver approaching at a high rate of speed from our left – phone in one hand, cigarette in the other – is doing nothing to defy preconceived notions. Thankfully the pedestrian ahead of us comes to the rightful conclusion that said taxi has no intention of slowing down, much less stopping, and she pulls back onto the relative safety of the sidewalk. I nudge Steph in the direction of another taxi, parked just across the road, but the driver signals for us to go the other way. “Shit!” This time I say it out loud.

“Residence La Contessina?” “Oh, hotel Contessina, si, si.” And just like that we’re off into the chaos of Florence traffic, lanes and lights be damned.

On its periphery, Florence is a sprawling network of roads, high-rises and billboards, not unlike any other modern city. The most striking thing I notice is the prevalence of graffiti, seemingly sprayed onto every available surface as if Florentines simply can’t contain their artistic impulses. As we make our way towards the historic center of the city the roads narrow until we’re eventually on a single lane alley between colorful old buildings.

“21 Euros.” Signs at the airport and online research I’ve done prior to the trip all said that taxis charge a flat rate of 20 Euros, but I’m not going to argue with our driver over a buck. We’re here, and from the outside at least it looks good.

“Buongiorno. Yes, Stokes. There is problem with your room.” Shit (internal dialogue of course)! “But we move you to apartment suite instead.” I looked at the apartment suites online when booking and they’re more expensive. Here comes the rip off. Damn it! “No extra charge for you of course.” I make a mental note to work on my trust issues and not be such a dick as we’re shown to our fabulous apartment suite.

And the apartment is indeed fabulous, but we’re in Florence and there are still several hours of daylight to be had. We dump our bag, brush our teeth and hit the streets armed with our usual accompaniments; Nikon D300s with 50mm 1.4G for me (along with 10-24mm and 18-200mm lenses in my shoulder bag), and iPhone 4 with Hipstamatic for Steph. This is going to be fun.

“Move over, bike coming.” “Watch it, motorcycle.” “Jesus, how fast was that car going down this alley?” And that, my friends, was just our first 30 seconds out the door. This is going to be interesting.

It doesn’t take long before we come upon our first historic treasure: the Medici Chapel. I’m already in full tour guide mode, spouting off info I’ve gleaned from Lonely Planet, Wikipedia and Trip Advisor while planning this little foray. I assume that Steph – having had no time to research anything Florence related in the lead up to our trip because of the inconvenience known as a job – wanted to hear all my acquired tidbits. I end up making another mental note to myself, this time about the folly of making assumptions.

Given that it’s so close to our hotel and we’ll be passing it every time we come or go we don’t linger long at the Medici Chapel. It only takes another few minutes until we round the corner at the intersection of Via Zannetti and Via de’ Cerretani, turn due west and catch our first glimpse of the Cattedrale di Santa Maria del Fiore, commonly referred to simply as the Duomo.

Steph is already going camera crazy and enthusiastically shows me her images. “Look at this! It’s like it’s in HDR, but it’s real!” I love it when she makes technical photographic references. “Why aren’t you taking any pictures?” “Eh, just waiting, checking it out first.” “You sure you’re okay? I thought you would have taken dozens of pics by now.” “I will, just giving it a look first.”

We make our way around the Piazza del Duomo and I take the odd snap or two of random street scenes and of Steph, but no photos of the cathedral itself. Without a cloud in the sky (this will be the case all 4 days) the light on the scene is still a bit harsh for my liking at this time of day. Anyway, I’ve told myself this isn’t a photo expedition for me, it’s an anniversary trip for us, and I’ll not be dragging Steph out of the way for photo ops.

“Which way?” “South monkey, towards the river. The light should be getting good for sunset pics, especially if we make our way across the Arno and up to the Piazzale Michelangelo. Little bit of a hill to get there but I hear it’s worth it.” Not that I am trying to drag anyone out of the way for a photo op mind you.

Between the Duomo and the Piazzale Michelangelo we pass through the Piazza della Signoria, the political center of Florence. In 1497, the Dominican priest Girolamo Savonarola set fire to many of Florence’s works of art in what was only one of many bonfires of the vanities events. I find it pleasantly ironic that today in the general vicinity of where that fire raged – fueled as it was by primitive ignorance – there simply must be the greatest concentration of artistically rendered genitalia in all the world. Naked statues – including several world renowned masterpieces (although some are replicas) – adorn the piazza, and within the adjacent Palazzo Vecchio and Galleria delgi Uffizi there are literally thousands more sculptures and paintings depicting the unclothed human form.

I find myself spouting off again, this time about the meaning of this posture or that hand gesture in regards to the statues, and feel more than a little pride in having remembered quite a lot from the one art history class I took a few ago. Steph, however, is less than enthusiastic about my academic ramblings, or what she commonly refers to as my chronic verbal diarrhea, and we head to the river hand in hand but in silence.

As soon as we pop out the other side of the Palazzo delgi Uffize and cross the road (race track) we are along the banks of the River Arno. To our right is the iconic Ponte Vecchio, the only bridge in Florence which still houses merchants. It is also the only one of Florence’s bridges across the Arno not destroyed by retreating Nazis during WWII, reportedly at the direct order of Hitler himself.

We make our way upstream and cross the river on the Ponte alle Grazie, a plain looking bridge which I’m sure not many visitors ever remember the name of. There are a series of handy signs pointing us in the direction of the Piazzale Michelangelo, and the final push up a huge set of stairs really brings the hunger to both of us.

The view from the top is truly spectacular, and though it’s a bit hazy and there are no clouds to add any interest to the sky we are pleased enough with our photos. Steph and I both snap pics for other happy couples but never ask for the same in return. Somehow it’s just not our thing. Neither one of us particularly enjoys being in front of the camera, but we do take the requisite touristy pics of each other overlooking the view.

We linger for a bit, both of us noticing the prevalence of American accents in the crowd. And while Italians are certainly (stereotype warning) loud and boisterous in conversation, there really is a certain unappealing brashness about the typical American tourist, unintentional as it may be.

By this point we’re really feeling the hunger and decide to head back into the city center and find some food. We eventually decide on a restaurant just off the Piazza della Signoria, although Steph is a bit dismayed by the lack of patrons. I take it as a sign that we’ll get our food quicker and figure anything we eat in Italy is bound to be good. Right?

“Try this. I don’t think it tastes of anything.” I’m enjoying my prosciutto and ricotta pizza just fine, although to be honest I was hungry enough that most anything would have gone down at this point. “Hmm, yeah, it doesn’t have any flavor. Weird.” Steph’s lasagna is indeed profoundly flavorless, but as with me she’s hungry enough that it goes down quickly anyway.

Finally getting the bill we pay up and decide to wander the streets for a bit, heading in the general direction of our hotel. After a brief stop at the Piazza della Republica to check out a sweet looking merry-go-round we’ve both decided we’re still hungry and figure now is as good a time as any to try some of Florence’s famous gelato. We point and smile our way to cone and flavor selections and take our cool treats away, continuing our leisurely stroll back to the hotel.

“Did you fart?” “No! It’s the sewage. I’ve been smelling it off and on all day. I read that Italy has a pretty bad waste disposal problem, mostly due to government and mafia corruption. From what I understand it’s, uh, never mind. I’ll stop spewing about sewage now.” “Thank you baby.”

One thought on “Florence Italy: Day 1”